EPISODE LINKS IN THE COMMENTS 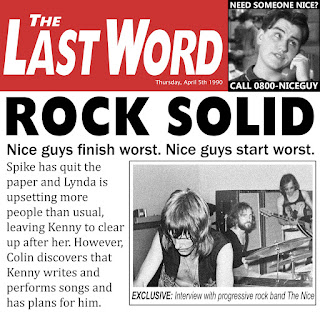 Kenny Phillips. He's a real nice guy, but he doesn't like to go on about it. He also doesn't like to mention that he's a budding singer who exclusively sings songs penned by future EastEnders actor Lee Ross.

Colin finds out this fact and, after some of the kind of unexamined wardrobe-hiding creepiness that Jarvis Cocker of Pulp once sang about, kickstarts the career of The Yummiest Man in Rock™.

Meanwhile, Spike and Lynda continue not to be an item and Sam makes friends with an angular frog in ROCK SOLID.
Posted by Chris JC at 2:13 PM 3 comments: 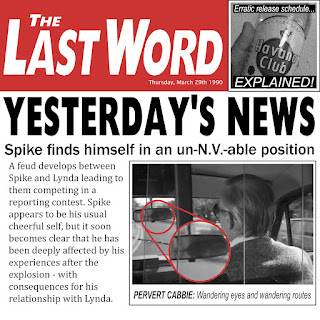 With a title like Yesterday's News, it's appropriate that this new episode of The Last Word Podcast should perhaps not be the freshest recording we've released. Sadly, "Three Month Old News" doesn't have the same ring to it, despite being entirely accurate.Obviously Chris and Alirio will talk about the shocking twists of the Press Gang episode: N.V. Gillespie, the prurient taxi driver, Lynda's three breasts and the final shocking one-day-out passing on of the news but also prepare for Personal Services, Teenage Mutant HERO Turtles and Alirio's nunchuck construction tips.So, instead of waiting further, let's unwrap tonight's fish & chips, discard it and get stuck right in to YESTERDAY'S NEWS.
Posted by Chris JC at 1:38 PM No comments:

The Rest of My Life 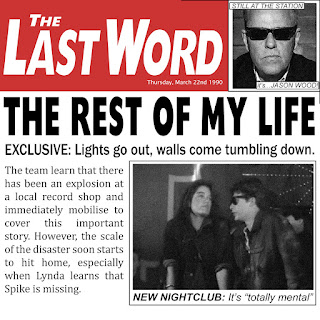 With only a disembodied voice for company it's a harsh few hours for an upbeat chatterbox and these events go to show how much bite and surprise Press Gang still has.

Chris and Alirio are joined this time by feedback maestro Matt who helps us sift through the emotional wreckage of THE REST OF MY LIFE
Posted by Chris JC at 6:31 PM 1 comment: 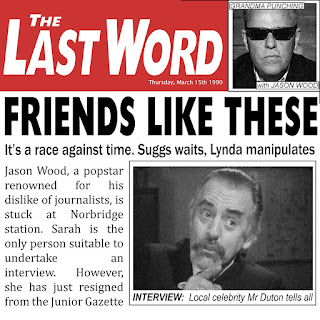 Welcome to an bumper, accidental Christmas special of THE LAST WORD!

Renowned pop star Jason Wood (famed for throwing photographers out of windows and punching old ladies through hedges), played by similarly renowned pop star Graham "Suggs" McPherson (famed for being the lead singer of Madness and doing the Nutty Dance) is having an accidental stopover at Norbridge Station.

The Junior Gazette wants to scoop everyone and get an exclusive interview with the famously difficult star, and the only way they're going to manage this is for Lynda to cynically manipulate one of her best friends, something she manages without even breaking a sweat, much to the amazement of Alirio, Chris and visiting elfin buddy Rose, in FRIENDS LIKE THESE.
Posted by Chris JC at 8:53 PM 1 comment: 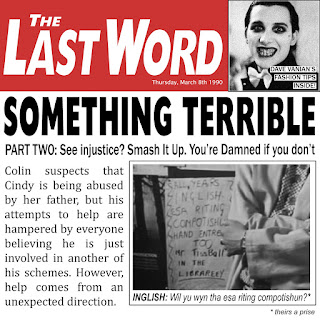 This is a very affecting episode, and Chris & Alirio are just two of the people affected by it. This is the sort of thing US viewers might think of as a Very Special Episode but it doesn't behave in the way that they may be used to from other series covering as sensitive a subject as the sexual abuse of a child and is all the better for it. Incredibly informative, balanced & moving and not even slightly patronising, it's a masterclass for any writer wanting to cover similar ground in children's fiction.

Join us for SOMETHING TERRIBLE PART TWO.

Something Terrible Part One 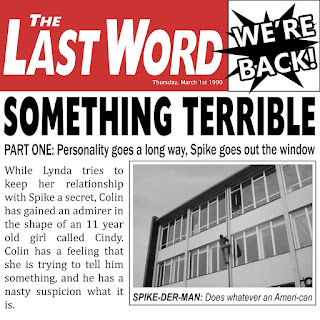 In a callback to the relaxed release schedule of our early days, it's THE LAST WORD PODCAST. Colin meets an unusual young girl who seems to be reaching out to him, of all people, for help.

Meanwhile, Spike and Lynda are presumably all over each other, but very much only when there's nobody looking, and often just after Spike has had to scale a building.

Will Colin be able to help Cindy, or will she, us and the entire world be rescued by the amazing Benjamin Drexil before Colin even decides to stop panicking? Will Tiddler's rabbits carry on breeding until they destroy the planet's resources?

The answers to none of these questions will be answered in SOMETHING TERRIBLE PART ONE.
Posted by Chris JC at 2:27 PM 1 comment:

At Last a Dragon 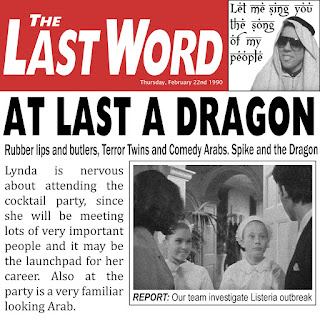 At last, it's At Last a Dragon! In a flashback to the early scheduling style of The Last Word Podcast, this one's been a while coming (we tend to blame the people renovating the flat next to Chris who are still constantly drilling holes into the wall). It's worth the wait, though, because this episode has it all! No newsroom! No sign of most of the regular cast! No comedy voice over on the end credits!

Hmm, that doesn't sound like "having it all" at all. In fact, that sounds like having far less than usual until you get stuck in and find there's genuine romance, and sentiment and an actual nice guy (rather than a Nice Guy™). Oh, and two children try to kill people with food while Colin dresses as an Arabian prince and Mr Sullivan clearly gets some.

What, or who, is the dragon? And is our would-be dragon-slayer successful once they lock horns? Guys, we've got so much to talk about. Get stuck into AT LAST A DRAGON.
Posted by Chris JC at 8:39 PM 4 comments:

SPECIALS
Episode Zero
SERIES ONE
Page One
Photo Finish
One Easy Lesson
Deadline
A Night In
Interface
How to Make a Killing, Part One
How to Make a Killing, Part Two
Both Sides of the Paper
Money, Love and Birdseed
Monday-Tuesday
Shouldn't I Be Taller?
SERIES TWO
Breakfast at Czar's
Picking Up the Pieces
Going Back to Jasper Street
The Week and Pizza
Love and the Junior Gazette
At Last a Dragon
Something Terrible, Part One
Something Terrible, Part Two
Friends Like These
The Rest of My Life
Tweets by @lastwordpodcast